In ancient Rome you married for life.  There were no divorces.  So the Romans took great care in selecting a partner for marriage.  The Paterfamilias was responsible for making sure all the family's children made good marriages.  They would look around and try to find a good match for their children.  The families of both children would enter into negotiations as to which family would provide for the young couple.

In Rome, you could not be married to more than one person at a time, and both parties had to be consenting adults.  Many marriages were set up for political reasons.  In ancient Rome, the marriage of two children was also the joining of two families.  Marriage also had to be outside the family.  You couldn't marry any relative, not even third or fourth cousins.  The woman brought a dowry into her new husbands family.

Many of the customs that the Romans used for engagement and marriage have carried down to today.  For example:

If you could afford it an engagement ring was given.  This was to signify that the people involved were to be married.  The engagement ring was worn on the third finger of the left hand.  The Romans believed that there was a nerve that ran straight from this finger to the heart so the ring would encourage love.

Roman women wore a special dress to get married in.  They put a belt around the dress with a special knot (the knot of Hercules) that only the husband could undo.

The Bride wore a veil and wove flowers into her hair.

After the wedding there would be a dinner for the bride and groom usually held at the brides house.

The bride was picked up and carried into her new family's house by her husband. 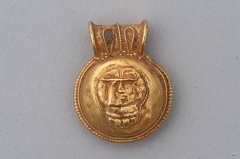 A Bulla, a special locket

There were many other rituals and details that went into a Roman wedding, such as a young girl would give her bulla, the special locket given to her at birth, to her father and never wear it again.  She would also give away all her dolls and toys as she would no longer be a child but a woman.  Roman women and girls had to state aloud their consent to being married.  They usually got the blessing of a priest of one of the major temples.