Rome grew from an important city into a huge, crowded, noisy, smoky, dusty city, with beautiful temples and public buildings. The rich had gracious homes, each with an entrance atrium, which was the center of family life. For those who were not quite as rich, there were apartment buildings, some quite nice ones, and there were shabby tenements for the poor. Narrow streets wound between the seven hills, lined with homes and businesses.

Flats: Plebeians lived in apartments called flats.  For those who had businesses, these apartments would be above their business.  If their building had more then two stories, they would rent out the upper floors to other plebeians.  These type flats were usually spacious and pleasant.  Sometimes they even had running water.

Tenements: If you were just a workman or unemployed, your apartment was not nearly so nice.  The poorer people were crowded into one room flats, and had to haul their water in from the local fountain.  There would be no bathroom or toilets; they had to use the public bathrooms.  They would cook, sleep, and eat in the single room, with sometimes 15 or 20 people in one room.  Fires were frequent, as was disease and epidemics. 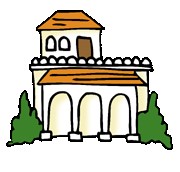 Villas: Patricians, the rich nobles, lived differently.  While the whole family (parents, children, grandparents, aunts, uncles, etc.) all lived in the same house, this house would have rooms for all of them.  The house would be built with an open area in the center, the courtyard, where most of the cooking and eating took place.  There would be rooms for entertaining as well as an atrium.  The homes were frequently made of brick or sandstone blocks, with tiled roofs and growing plants around. Some homes of the wealthy had offices if needed, and maybe even a private bath.  There would be paintings, sculptures and mosaics around.  If they were wealthy enough, there would be slaves to do all the cleaning and cooking.

Sample Plan of a Roman House