Rome was growing.  It was starting to expand beyond the southern Italian peninsula.  At the same time as Rome was growing so was the city-state of Carthage.  Carthage was in North Africa and had sent out its ships and soldiers to many parts of the Mediterranean.  Carthage had conquered three islands off the coast of modern day Italy. Rome felt that these islands should belong to Rome.  The two governments could not reach any agreement, so these two powers went to war.  Carthage had a great navy.  The Romans had a great army.  This war was going to be bad.

The wars between Rome and Carthage are called the Punic Wars.

The First Punic war lasted for 20 years.  Neither side won.  Carthage could not beat Rome's army, but Rome could not beat Carthage's navy.  The war caused many deaths and lots of destruction.  The Romans caught a break when the captured an enemy ship, stuck at low tide. The Romans were great builders. They set about immediately copying the ship until they had quite a few seaworthy. Still, they could not beat Carthage's navy. But they could keep the war going on land as well as se. The First Punic war ended when Carthage decided to end the fighting by giving Rome one of the three islands they wanted.

Outcome –  takes , then Sardinia and .  pays a heavy fine. 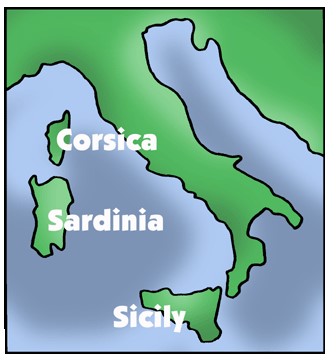 At the end of the First Punic war, Carthage's decided to expand into Iberia (Spain).  They sent their best army with their best general Hamilcar.  Hamilcar took along his oldest son Hannibal to help him.  Carthage was doing really well in Iberia when Hamilcar got sick and died.  The Carthaginians wondered what to do.  The army had no such worries.  By popular acclaim, they made Hannibal their General.

Hannibal: Hannibal was a great general.  He was also very tricky.  He won battles by using new and different ideas. As an example, once while fighting at sea, he had his men throw live snakes on to the enemies' ship.  The snakes frightened the enemy so badly they surrendered. (The ancient Greeks did the same thing against the Persians. It worked for the Greeks too.) 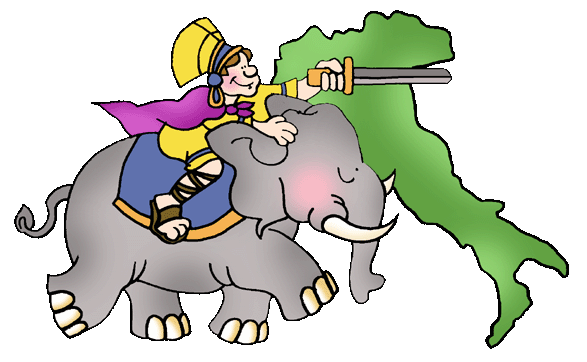 Second Punic War: Carthage wanted to conquer all of Iberia and Hannibal set about doing just that.  Unfortunately, some of the cities in Iberia were allies of Rome.  When Hannibal attacked one of these cities Rome used this as an excuse to declare war Carthage.  Rome was to rule northern Africa and Carthage was in their way. But Rome did not go after Hannibal in Iberia. They sent their main army to attack Carthage.  Hannibal knew he had to do something to prevent the Romans from conquering Carthage, but what?  He was in Iberia with his army.  Rome was safe on the other side of the Alps, which were a very tall and steep set of mountains.  Hannibal didn't let that stop him.

In a feat for which he is remembered still, Hannibal decided to invade the Italian peninsula by going over the Alps and attacking Rome from the north.  He decided to bring his war elephants with him.  No one of the time believed that it was possible, and it almost wasn't.  Hannibal lost most of his elephants to the cold of the mountains, and he lost half of his men as well.  But he did cross the Alps and brought the rest of his army into the Italian peninsula from the north, moving south to attack Rome.

Because of his losses as he crossed the Alps, Hannibal's army was not strong enough to attack the city of Rome.  Instead, Hannibal attacked other cities and towns throughout the Italian peninsula.  Hannibal and his army spent 15 years on the Italian peninsula fighting against the Roman legions.  Rome was worried and afraid.  They had to keep a large army near Rome to protect against Hannibal so they could never get enough troops out to catch him.  Rome settled on a new strategy.  Once again, they sent their army to attack Carthage itself.

The war was over, but the Romans were still after Hannibal.  Hannibal led his troops back to Spain and continued fighting against Rome.

Third Punic War:  While Rome was busy at other tasks and in other parts of the world, the city of Carthage was growing strong again.  Soon Carthage felt strong enough to fight Rome.  The third Punic war started.  The Romans and Carthage fought for several years but Rome was too strong.  The Romans defeated Carthage again.  This time Rome had had enough.  They rounded up all the people of Carthage and sold them into slavery.  They tore down every building in the city, then spread salt over all the farms and fields around where Carthage had been.  Thus the land was no good for growing food. There was no longer a city of Carthage.

The Council of 12 gods - It started really with Hannibal