The ancient Romans were practical people. They wanted their art and architecture to be as practical and useful as possible. They also wanted it to be beautiful, but only if it was practical. So a great deal of their art was used in the construction of the architecture they built - in their buildings, baths, temples, road signs, and homes. Concrete is a ancient Roman invention. They used concrete in structures to make them strong. They placed designs into the concrete area, if any, that was visible. They developed many new techniques for buildings and construction of all types including Roman roads, Roman arches, and aqueducts.

The Romans are famous for their mosaics, which were made of bits and pieces of colored ceramic tile. Their artists put these pieces together in breathtaking beautiful ways. But the tiles were also practical. Mosaics were used on floors and walls and hallways and entry ways to not only beautify but to strengthen. They were also easy to wash.

Very little of Roman art was created simply for beauty's sake. Nearly all their art had a practical purpose, such as honoring their gods or honoring someone of importance. 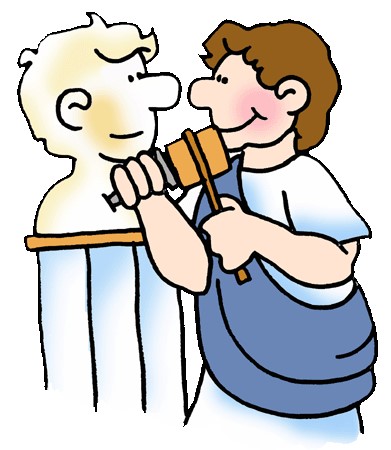