The period in history when Rome was a kingdom was finally over. After years of fighting against the last king of Rome, Tarquin the Proud, the people of Rome won! Tarquin the Proud was not a good king. He was a tyrant and the people hated him. History is not clear about how the ancient Romans got rid of Tarquin, but historians do know the people were finally free to form a new government. It was very important to the ancient Romans that this new government be a fair government, and that all laws applied equally to all the citizen Rome, be they rich or poor. They called their new government SPQR. The letters SPQR stood for Senatus Populus Que Romanusa - the Senate and the People of Rome. It was a new form of government, a republic.  A republic is a type of government whereby people elect officials to represent them in government.

The ancient Roman republic allowed only Roman citizens to vote for leaders, who then created their laws. In ancient Rome, only adult free men could be citizens.  That meant women, children and slaves were not citizens, and could not vote. Still, it was a vast improvement over the tyranny these ancient people had experienced under some of their kings.  Rome was now ruled by officials called Senators.

Many of the laws created under the new government by the Senators were not new laws. But the laws were written down clearly, and applied to all citizens equally. Some new laws were added. One new laws was that you were innocent until proven guilty of any crime. Another law provided every citizen had the right to challenge their accusers in court. The law gave judges the power to set aside unfair laws.

The new Roman Republic wanted to make sure that every citizen knew the laws. So they engraved the laws on tablets of metal and put them in the Forum in Rome for everyone to read. These laws were called the Twelve Tables because there were twelve different sections.  These laws were about crime and property and family matters like marriage and inheritance. The laws, like all laws, were adjusted over time to reflect the times. But the main laws, whatever they were, were on display at the Forum throughout the entire time Rome was a Republic.

In the latter part of the Roman Republic, before Rome became an Empire, one of the reasons that some leaders in Rome were so upset with Julius Caesar was because Caesar simply ignored the law. He didn't try to buy his way, or finagle his way, or lie his way out of trouble. He simply behaved as if the laws did not apply to him. That's why the leaders in Rome were shocked at his behavior, and why they decided to assassinated him. They did not want their laws to become meaningless. They certainly did not want a leader who believed he was above the law. Rome was very proud of its laws, and proud that the laws applied equally to all Roman citizens, be they the richest or poorest or most powerful of all the people in Rome. The law was the law.

The ancient Romans were willing to submit to the rule of law far more than the quarrelsome Greeks. This discipline and adherence to Roman law produced magnificent soldiers, which helped Rome to expand and ultimately to become great. Many law codes today are based in part on the Roman law codes. Many of their laws would not fit our society today, but then some of their laws did not fit their society as Rome grew. Laws were adjusted under the Republic to fit the changing social climate of the population.

Below are some of the laws in the Twelve Tables. These laws have been rewritten in modern English and simplified, but their meaning is unchanged. These laws tell us about life in ancient Rome under the Republic. 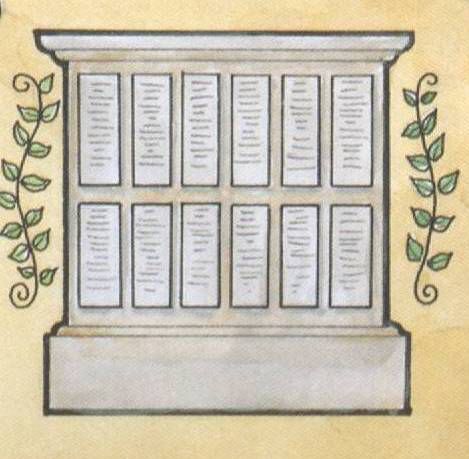 Here are some of the laws of the Twelve Tables

Crime and Justice in Ancient Rome